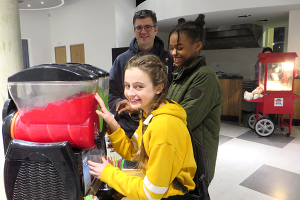 A chilled Movie Night, with free slushies and popcorn,  featuring the film Breakthrough . A teen choice award nominee, this was based a true story showing that miracles really do happen. 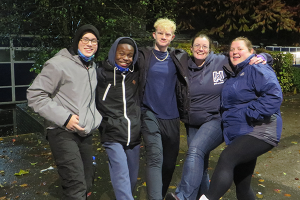 The Youth Across Hemel team raised a whopping £370 between them when they swapped their cosy beds for sleeping bags in the DENS sponsored sleepout at Hemel Hempstead School.    This is the fourth time YAHemel have join the DENS sleepers, which doubled in number to 200 this year, raising some £35,000 to help vunerable people in our town. 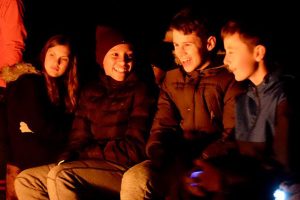 A trail of tea light lanterns through the pine forest at Spring Meadow Farm in Berkhamsted lit the way to Youth Across Hemel’s annual bonfire party. On the menu were toasted marshmallows and chocolate milk around the cheery, crackling bonfire where glow sticks, sparklers, games, acoustic worship and singing were enjoyed by the 40 strong crowd. 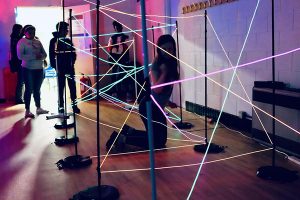 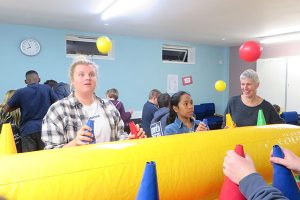 Themed Mission Impossible, the evening kicked off with a Master of Disguise photo booth and a luminescent wire obstacle course testing young people’s agility to pass through a corridor of tangled “laser beams” without touching them. A strike-a-light reaction game, buzz wire, morse code signal, and under pressure inflatable challenge also tested dexterity, focus and co-ordination. A Mission Impossible creative prayer space, was also set up in collaboration with Expressions Academy. Young musicians from South Hill Church led a time of worship before chairman Damon Harding from YAH shared an encouraging message on Jesus’s words that “nothing is impossible with God.” An afternoon of bumpy rides over tree roots, dirt tracks, mud and grass through  scenic Ashridge forest and the surrounding area. Headlined by laser tag, human Chinese checkers and a Pilgrim’s Progress prayer space, Mazerunner was the theme for this Mix.  While one team played laser tag threading a room with frenetic neon, light patterns, another group played man-sized Chinese checkers on a 30 foot grid, mapped out on the floor. A third group explored a creative prayer space based on John Bunyan’s classic novel Pilgrim’s Progress . Young musicians from South Hill Church led a time of worship before Katie Beeson from YAH shared an encouraging message on Jesus is the gate . An eight strong team from YAHemel slept out in the wet and windy grounds of Hemel Hempstead School to raise awareness and money for local homeless charity DENS. So far the team have raised a whopping £600. This time DENS staged a silent disco in the school hall to help warm and entertain the hundred or so sponsored sleepers. Golden sparklers, toasted marshmallows, chocolate milk and acoustic worship led by the youth at South Hill Church united some 40 young people and church youth leaders for our bonfire party at Phasel’s Wood. Party-goers followed a glow stick and fairy light trail to gather under the stars by a roaring bonfire, fuelled by old palettes and decking. Some 40 young people from seven local churches  joined us for our themed evening “Tumbling Walls”, a fun opportunity to build bourbon biscuit domino runs and sugar cube towers. A prayer warriors room and escape room were also featured while guest speaker Jason Reynolds from Luton Christian Fellowship shared about how God wants to  bring down negative strongholds in our lives such as depression, anxiety, fear and resentment and replace them with hope, confidence, courage, love and forgiveness. Loads of bourbon biscuits were left over to consume with hot chocolate. “Make or Break” was the theme which drew young people from seven local churches for cosmic and creation themed challenges involving marshmallows, toothpicks and playdough followed by workshops in making and breaking clay pots. The upper hall was transformed into a creation themed prayer space filled with twinkly lights, a fountain, plants and seven interactive prayer stations. The fun, fast evening finished with sunrise mocktails and a galaxy bar. The YAHemel six strong team of leaders and young people joined more than 70 sleepers for a wintery night under the stars in the grounds of Hemel Hempstead School. This annual event helps to raise both awareness of homelessness and important funds for local homeless charity DENS. A talented bunch of singers and players entertained friends in this chilled, hang-out zone for 14 year olds and upwards. Hot chocolate, cupcakes, biscuits were all free along with the great sounds and fab company. Based on the theme “Bounce Back” and being resilient in God, some 35 young people gathered for crazy ping pong team games which tested their dexterity in five separate challenges. Some took part in an upbeat street dance to the Newsboy’s Restart, others performed a drama on the stickiness of sin, or chilled in a creative prayer workshop. A bubbly finish was had by all as they enjoyed mango and lemon bubble teas served with strawberry juice pobbles. A muddy 11 km cross country bike hike through Ashridge footpaths and byways in warm sunshine took us on a  fun and challenging journey, pitted with tree roots,  potholes and muddy terraine. The route was successfully completed by all who took part in  just under two and a half hours.

A frenetic text treasure hunt around Hemel town centre, with clues stretching from Pizza Express to The Royal Bank of Scotland, challenged the wits and athleticism of some 50 young people and youth leaders as they raced to find the answers at our seventh Mix.

Based on the theme “Hope is the anchor”, this was a chance to mix with old and new friends, enjoy a portion of fish fingers and chips as well as take part in workshops in music, drama and ceramic painting. During these creative sessions, musicians and singers learnt and performed a new song, “Anchor” by Hillsong; experimented with a powerful drama developed by missionaries to Bolivia Dean and Ruth Such; and painted anchor designs and scripture onto mugs and tiles. 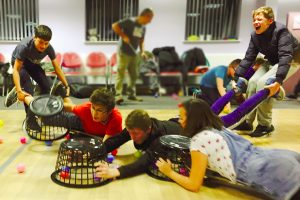 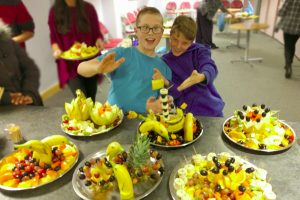 Kicking off with belly-skateboarding human hungry hippos gathering balls with laundry baskets for their team, the Mix returned for its sixth installment based on the theme “Taste and see that the Lord is good!” Compered by Sunrise Church Youth Leader Josh Mitchell and Creative Director of Expressions Academy Daniella Hobbs, one highlight included a Team Challenges workshop where contestants had to squirm head first across the floor in a sleeping bag relay. Blinded by the sleeping bag in front of them, it was difficult to gauge in which direction to head except from the shouts and cheers of team members.

A Circus Skills workshop gave youth the opportunity to ride a unicycle, toss spinning plates to one another, hoola hoop, juggle and have a go at stilt walking. A Jelly Bean Prayer Bracelet workshop provided a fun, calm spot for contemplative threading, while the Fruit Carving workshop equipped young people with the skills to carve banana dolphins, fruit flowers, a melon boat and beautifully arranged fruit platters which everyone enjoyed with a chocolate fountain. Bubble wrap run mats were created  and raced by young people and youth leaders at Gadebridge Park. Amongst other games and picnicing, this was a time to chill with friends and have a laugh. A giant inflatable cactus hoopla and friendly youth workers from across local churches welcomed some 30 young people to St George’s URC to celebrate The Mix.  Based on the theme “The Lord is my strength, my song and my salvation,” the evening kicked off with several games including a bouncy hopper relay, followed by a cover of 21 Pilot’s The Judge, by members of the youth band Room 38.

A music workshop led by Gus Nunes and Josh Mitchell  from Sunrise Church drew a lot of talent and interest, bringing together 12 young musicians who had never rehearsed together before to perform worship song Set a fire. Daniella Hobbs, creative director from Expressions Academy choreographed dancers to perform a skilful and upbeat number in the dance workshop. Adeyfield Free Church youth pastor Ruth Cordell organised a freestyle arts and crafts workshop which was popular with older youth while Lisa Dussek, also a balloon artist from inspiredballoons.co.uk,  offered a balloon modelling workshop creating balloon dumbbells and flowers. Daniella Hobbs, Creative Director of Expressions1Vision, said: “We love giving young people the opportunity to recreate stories in their own way. It provides understanding and ownership of God’s word transforming their own relationship with God. The creativity they produced was truly inspiring.” 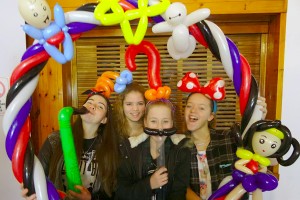 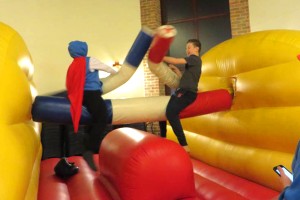 Our Superhero Party at Our Lady Catholic Church was a welcome blast for the new year bringing youth groups together for  fun, friendship and sharing faith in the one, true, super hero Jesus Christ. Dress in various capes and guises, youth happily took to bishing and bashing each other with pillows and padded jousting sticks on the inflatable Baymax Pillow Wars.  A Daily Bugle photo booth invited party goers to have snap shots taken of them dressed in balloon accessories in a superhero themed photo frame, and a video blog gave them opportunity to share their faith story to camera.  Fantastic Four in Row, Superman Jenga, a Justice League Prayer Powerhouse,  Thor wellying throwing and Judge Dredd nerf gun training were also on offer. Due to massive downpours, YAH  relocated the scheduled Bonfire Party at Phasel’s Wood to Our Lady Catholic Church Hall with a sparkler and glow stick filled Games Night which culminated with a music video from the Sidewalk Prophets and a message of God’s love for us . Sucking strawberry laces, threading string through sleeves, and stuffing balloons in giant, lacy knickers were some of the larks young people got up to at The Mix. Based on the theme Our Story, the aim was to relax with old friends, meet new ones and introduce young people to how God connects with us. This is the fourth time Youth Across Hemel has organised The Mix, encouraging youth and leaders to visit different churches across the town, have fun and inspire one another. An evening bursting with teen talent, messy games, and biblical encouragement that drew in 65 young people and youth leaders. Focusing on the theme of  Self Worth, Adeyfield Free Church and reFRESH performed thought provoking dramas, St George’s youth painted an inspiring artwork (above), South Hill Church played an award winning piano duet and a Year 7 guitar and drum set, while Sunrise Church youth invited the audience to join in with a couple of band numbers. YAH’s second instalment of The Mix, the theme was Jesus, Light of the World. Some 55 young people from local churches enjoyed a fast-paced, magazine-style event  interspersed  with a mix of interactive activities, games, multimedia and live music. Lisa Dussek, YAH co-ordinator said: “Three different bands performed with young people from as young as 11 showing tremendous talent. It was so encouraging and inspiring to see their imagination, skill, and commitment to practise and perform live songs such as Go glow, Umbrella, from and In the Light .

Some 80 young people from local churches poured into St George’s URC on Sunday 1st February to celebrate The Mix, a new initiative from Youth Across Hemel inviting young people to mingle with peers, have fun together and grow in God. The event kicked off with a mix of interactive activities, games, and drama followed by dance, video and creative worship. The theme Our Shape looked at our skills, heart, ability, personality and experience to value how God has made us all different. YAH showed their support for homelessness charity DENS by taking part in the 21st annual sleep-out at St Albans Abbey, raising more than £2,500. With the night time temperature dropping to a biting 2 degrees celsius, Catholic youth leader Monty McShane said: “We woke in the morning with frost on some of our belongings. One night was hard enough and made us understand how hard sleeping on the streets is and how important the work DENS does is.”